Lawsuit Challenges School District of Philadelphia’s Failure to Translate Documents and Interpret for Parents with Limited English Proficiency and their Children with Disabilities
August 21, 2015

Philadelphia, Pa. – A federal class action lawsuit filed Friday alleges that thousands of parents and their children are illegally denied the opportunity to participate in the special education process due to the fact that they don’t understand or speak English. The complaint alleges that the School District of Philadelphia refuses to sufficiently interpret or provide parents with translated documents in a timely manner, preventing them from participating in meetings and making informed decisions regarding educational placements and services. END_OF_DOCUMENT_TOKEN_TO_BE_REPLACED

He is proposing a plan that would drastically reduce the amount the district pays for charter special education students.

Without immediate action, Pennsylvania Gov. Tom Wolf said Tuesday the Chester Upland School District will not be in a financial position to open its doors next month.

Wolf has a plan to rectify the situation, resting partly on the backs of area charter schools.

Wolf has asked a Delaware County Judge to approve drastic reductions in the payments Chester-Upland sends to charter schools.

“I, for the life of me, don’t know how you can open financially with what they’s staring at,” said Wolf, in a telephone interview.

Wolf’s solution hinges on what many education advocates have long considered a flaw in the way the state funds charter schools for special education students.

Under the current system, charters have a financial incentive to enroll students with relatively mild educational disabilities.

It works like this: Districts must give charters whatever the districts spend, on average, on special education.

If a charter enrolls many children with less costly needs, the charter makes out financially.

And then a vicious cycle is created. With fewer mildly disabled students in the district, the district’s average cost climbs, which it then must pay to the charter.

Right now, Chester Upland sends about $40,000 to a charter that enrolls an area special education student, no matter the student’s disability.

The Wolf administration’s official court filing points out that the money sent by Chester-Upland School District to charters for special-ed is “disproportionately higher than any other school district sending students to the same schools.”

“This is patently inequitable,” added the filing.

Wolf wants to implement a new formula in Chester-Upland that would align charter special-education payments nearer to actual costs.

Wolf’s plan is based on the 2013 recommendations of the Legislature’s bipartisan special-education funding commission. It proposed a three-tiered system of funding for special education based on the severity of student need.

Those recommendations were never adopted by the General Assembly.

“The special education issue is something that charter schools and public schools all across the commonwealth are struggling with,” said Wolf. “There’s an inducement to try to categorize more students than maybe should be categorized as special education just because of the way the formula works.”

Overall, Wolf’s proposal would decrease the amount Chester Upland spends on special-education payments to charters from $64.4 million to $39.8 million.

“As with any experiment, you need some tweaking,” Wolf added, of the way charters are funded in Pennsylvania.

Wolf also wants to cap the funding the state’s cybercharters receive for students from Chester Upland to just under $5,980, saving the district another $4 million.

The twofold approach would wipe away the district’s existing deficit, the governor said.

Wolf’s plan also calls for a forensic audit of the district’s finances and the appointment of a new turnaround specialist.

Without action, Chester Upland’s deficit will reach $46 million by the end of the school year.

The district was first classified as financially distressed in 1994. The Pennsylvania Department of Education said that from 2003 to 2012, the district overspent $44.4 million.

Over the past five years, the state has sent Chester Upland $74 million in extra, one-time infusions of aid.

“I don’t really care who’s fault it is. Over the last 20-some years, I guess there’s plenty of blame to go around. But, regardless, it’s our problem,” said Wolf. “I thought we needed drastic action in Chester Upland, and this is my best effort at that drastic action.

Wolf’s plan assumes that the General Assembly will approve his bid to raise state education aid by a half-billion dollars. Negotiations over the state budget have dragged on since the fiscal year ended on June 30.

He lamented that the recommendations of the special-ed funding commission were still sitting on the shelf.

“Unfortunately, the General Assembly was unwilling to compromise and nothing got fixed. Meanwhile, until the state Legislature complies with their constitutional mandate to provide adequate, equitable, and predictable funding for all students in all schools, we can expect more of these fights over whether to rob Peter or Paul.”

If approved by the courts, Wolf’s plan for Chester Upland would have a large impact on the level of funding to Chester Community Charter School – the largest brick-and-mortar charter in the state.

Payments to charters account for 46 percent of Chester Upland’s budget, and most of that goes to CCCS. The school has 3,126 students, nearly as many as the 3,300 attending schools in the Chester Upland district.

CCCS is run by the for-profit Charter School Management, Inc., owned by Vahan Gureghian, a prominent Republican in Montgomery and Delaware counties and major donor to political candidates. He was the largest individual campaign contributor to former Gov. Tom Corbett.

CCCS has traditionally enrolled a high proportion of special education students, most of them classified in the less expensive categories. According to the latest report to the state, nearly one in four CCCS students is in special ed – about the same rate as that in the Chester Upland district as a whole, but far above the statewide rate of 15.6 percent.

At CCCS, more than 27 percent of the students are classified as having a “speech and language impairment,” the least expensive disability. That is close to twice the state rate of 15.4 percent and 11 times the Chester Upland rate of 2.4 percent for that category.

By contrast, the CCCS percentage for the more costly categories of autism, emotional disturbance and intellectual disability are far below Chester Upland’s rates.

As the minimally disabled and least expensive special ed students are drained from Chester Upland, the district is left with students with more costly disabilities and its per-pupil spending rises. That then inflates the charter payment for the the next year.

The cost is also driven up because the state assumes that all districts have 16 percent
special education students. In cases like Chester Upland where the special education percentage is higher than 16 percent – at 24 percent, it is 50 percent higher – the total cost is divided by a lower number than it should be.

“They should be dividing by 24 percent,” said the Education Law Center’s Lapp. “If you have more than 16 percent, you get a higher number for the per pupil cost than you should.”

Charters can spend the money they receive for special education in any way they see fit.

Gureghian has declined to open the books of his management company to public scrutiny, arguing that it is a private business. He has not complied with court rulings on right-to-know requests.

Wolf said his proposal was not pointed at CCCS.

“It’s not. It’s pointed at trying to make sure that the Chester Upland School District is able to open for all kids on time,” said Wolf.

A spokesman for Chester Community Charter School did not return a request for comment, nor did the public relations firm that represents Gureghian.

CCCS was also implicated in allegations of standardized test cheating scandal, when a forensic audit for the 2009 tests found statistically improbable erasures of wrong-to-right answers.

A state investigation into what happened was aborted, and CCCS was allowed to investigate itself. No one connected with the school was ever held accountable, but when strict protocols were imposed, test scores dropped 30 points in each subject in each grade.

Gureghian and his wife, Danielle, were also disclosed to be the major donors to a PAC that gave to former state Treasurer Rob McCord, who resigned and pleaded guilty to extortion charges involving contributions to his failed gubernatorial campaign.

The Philadelphia Inquirer has reported that federal investigators are still probing the conditions under which the contributions were made. 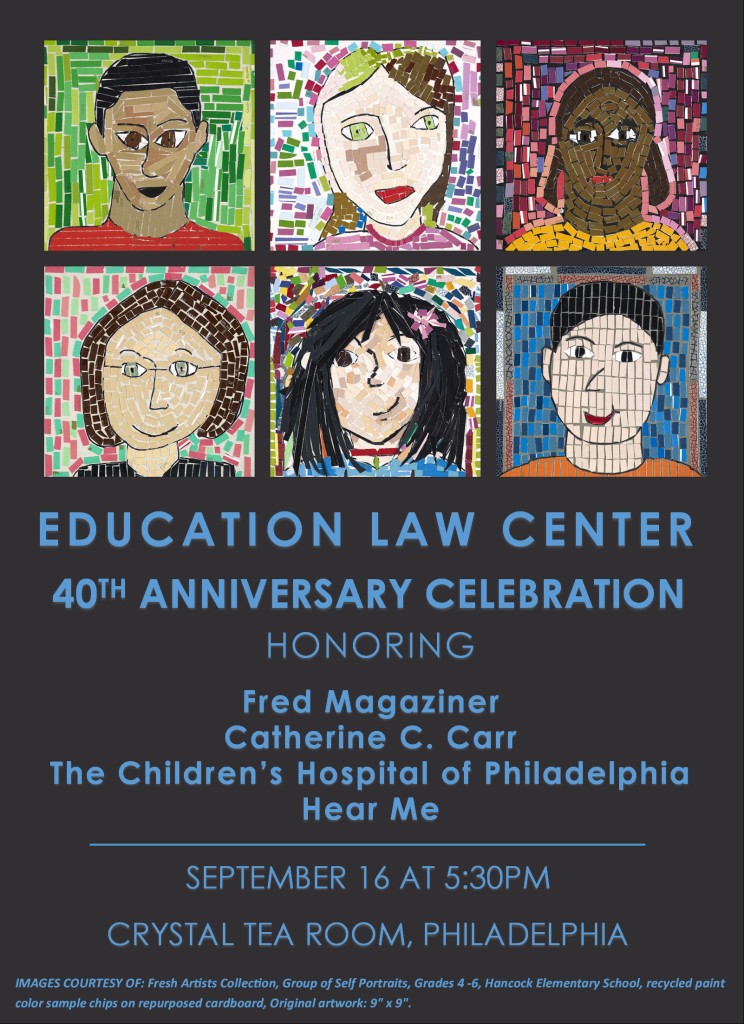 Help us celebrate our 40th anniversary!

Head Start (HS) and Early Head Start (EHS) programs work: they promote the school readiness of young children from low-income families and support the mental, social, and emotional development of children from birth to age 5.  Sadly, according to 2010 census data, slightly less than 50% of eligible children in Pennsylvania have a corresponding Head Start slot.  ELC has been working to change this by expanding access to Head Start and prioritizing our most vulnerable young children. Under the Improving Head Start for School Readiness Act of 2007,  children experiencing homelessness and those in foster care are automatically eligible for EHS and HS programs and must be prioritized for enrollment.

The School District of Philadelphia has openings and is currently accepting applications for enrollment to Head Start for September 2015.  Below is the list of locations that currently have vacancies and two flyers that have registration dates at McMichael and Pratt schools.  For additional information, please contact R. Waunda Loadholt, Social Service Coordinator at the District 215-400-6213.