We commend the School Reform Commission for restricting the use of suspensions against Kindergarten students and for adopting a revised dress code policy that removes subjective language which disproportionately impacted students of color, especially black girls. These reforms place Philadelphia on the frontlines of a movement to eliminate ineffective and harmful disciplinary policies that deny children access to the classroom and place them at risk for experiencing future educational barriers. However, the resolution restricting the use of suspensions against Kindergarten students does not go far enough; the District should restrict the use of suspensions for students in first and second grade, too. Across the nation, school districts and states have eliminated or restricted the use of suspensions against students in early elementary grades. Minneapolis, Seattle, Chicago, Houston, Connecticut, and most recently, New York City, have all banned or substantially limited this harmful and developmentally-inappropriate practice. Philadelphia should be no different. Suspensions to students in early elementary grades negatively impact their future educational outcomes and fuel the School-to-Prison Pipeline. Furthermore, exclusionary discipline is meted out, both in Philadelphia and nationally, in a disproportionate manner against students of color. To reduce the harmful and discriminatory effects, the School District of Philadelphia must curtail its reliance on exclusionary discipline in the early elementary grades even further. We look forward to partnering with the District and the SRC to help it follow through on its stated commitment to end this harmful practice.

As part of ELC’s continued work to create positive school climates, a second conversation with Dr. Morris will be hosted in Philadelphia on April 4th. The roundtable will focus on the challenges Black girls face in public schools – from inappropriate pushout policies and practices to barriers to academic achievement. 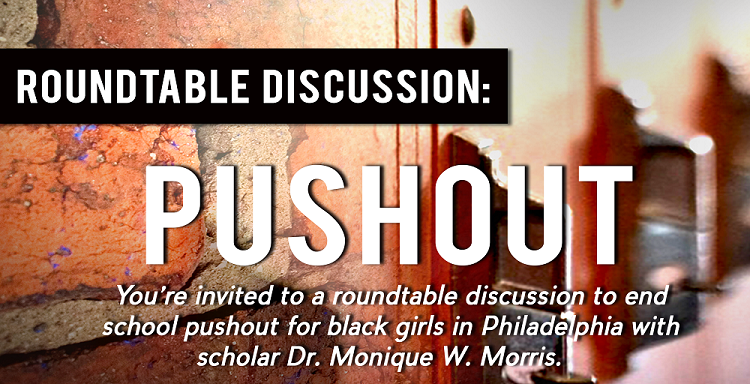 Monique W. Morris, cofounder of the National Black Women’s Justice Institute and author of Pushout: The Criminalization of Black Girls in Schools, will discuss her new book, and the challenges Black girls face in public schools – from inappropriate pushout policies and practices, to barriers to academic achievement. Click through for more information.